Ropa Dope plays off of the boxing term "rope-a-dope"; a word meaning to be trapped against a boxing ring's ropes and dodging ineffective punches thrown by the opposer. Arrucha and Montinar "dodge the blows" of items within Black and Hispanic communities associated with oppressive events, institutionalization, and last resort solutions by creating alternative fashionable uses for them. These alternatives twist the negative into a positive ownership of obstructive histories. The play on words come from the Spanish word for "clothes" (ropa) and a word stemming from black society driven hip hop culture detonating "cool" (dope [informal]). Ropa Dope creates a reclaiming of minority culture, history, fashion, and oppression while also showcasing the similarities between the minority groups of Blacks and Hispanics. 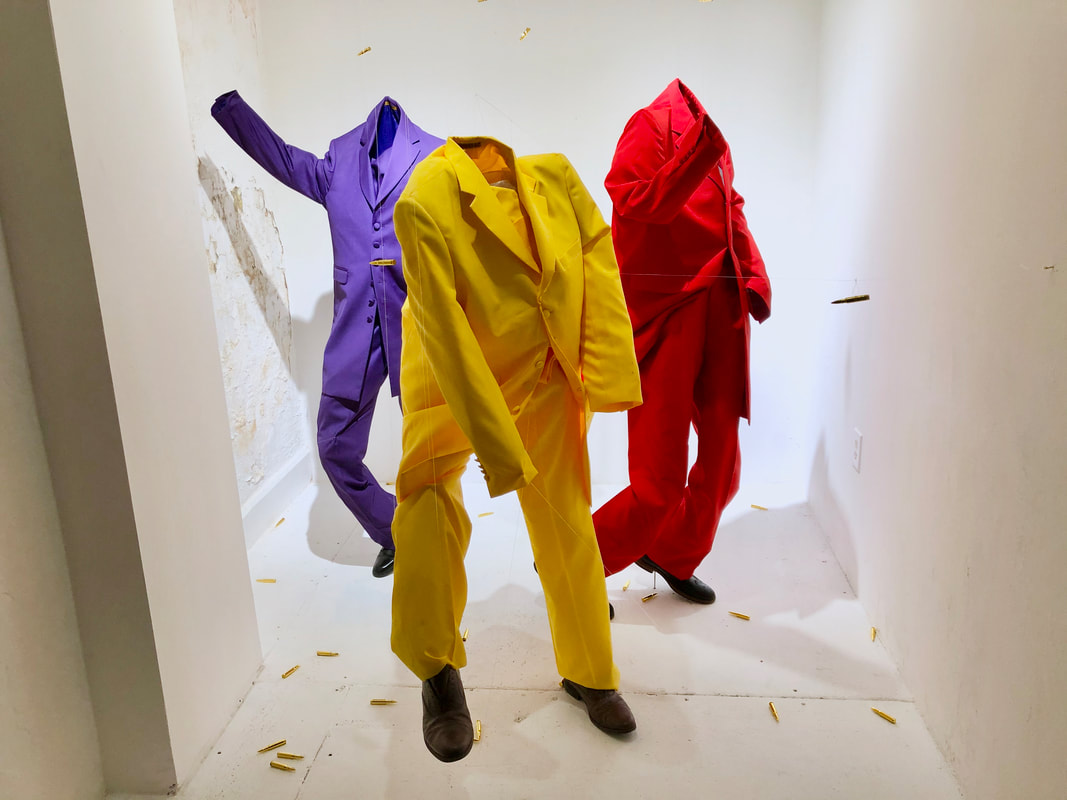 
The Zoot Suit Riots were a series of attacks from June 3 to June 8, 1943 on young Mexican Americans, African Americans, and Filipino Americans donning these over-sized suits in Los Angeles, California. Due to the exclusion of Mexican immigrants from American communities, a Mexican youth culture consisting of a unique slang, style, and music formed. They deemed themselves “pachucos” and “pachucas” and wore suits inspired by the African American Harlem Renaissance jazz scene to signify themselves. Zoot Suits were also still a popular fashion trend amongst young African American men at the time. White Americans (specifically sailors) viewed zoot suiters and pachucosas unpatriotic resource taking gangsters, who were violent and ignored the fabric rationing regulations of World War II. This prejudice led to racist and nationalist assaults and murders of Blacks and Mexicans across the country, including the areas of Detroit, New York, Philadelphia, and Chicago.

Discoteca 9 is an installation of three Zoot Suits in mid-action of three dances: Zapateado, Stepping, and the Boogie Woogie. Zapateado (red) is a rhythmic percussive stomping Mexican dance style and the basis of many Latin dances. Stepping (yellow) is a percussive body dance involving handclapping, stomping, and spoken word, originating from African Gumboot dancing. The Boogie Woogie (purple) is an improvised six patterned beat couple dance done by both Black and Mexican communities in the 1940s (in the midst of the Zoot Suit Riots). The dancing figures bring the suit back to its original intention “A killer-diller coat with a drape-shape, reat-pleats and shoulders padded like a lunatic’s cell (Malcom X)” to dance in, while simultaneously using these dances to “rope-a-dope” the aggression and violence towards Blacks and Mexicans in America.
​
Karla Arrucha and Steven Montinar
7 AM on a Sunday/ Sundial Disk Hat (2019)
4 inch Brim Sun Hat, Enamel Paint Pen, Bronze Colored Acrylic


Slavery has plagued both Blacks and Mexicans throughout history.

Shackles are a disreputable symbol of enslavement. Infamously the iron cuffs were used as restraints in the 1800s by colonizers to manacle Africans as they were transported through the Middle Passage into the Transatlantic Slave Trade for forced domestic and agricultural labor. The bondage of Africans in America officially lasted until 1865 with the addition of the 13thconstitutional amendment, yet the ripple effects of slavery continued on to the present, masking itself in systematic oppression.

Mexico is cited to be the largest source of international human trafficking, also known as modern day slavery, by the U.S. Department of State. Largely, women and children are either deceived by traffickers as they attempt to immigrate into America to escape daily hardships or kidnapped into forced labor. This involuntary labor can range from prostitution, agriculture, domestic servitude, drug transportation, mining, construction, et cetera (USDOS). It is reported that although it is known that the activity of trafficking groups has increased, the multitude of victims is still unknown.

Fixated in the shackles of Time Restraintis a pocket watch and on the brim of 7 AM on a Sundayis the numerical order of a sundial. The element of time is a crucial component in plotting liberation. Those fortunate enough to escape captivity decide how long is long enough, what time is the best time to act, and how can life be bettered from this point in time forward. Captivity can be literal, like being enslaved for agricultural work or metaphorical, like immigrating to the United States to free yourself from your financial restraints. By choosing to act leads to the reclamation of time which ultimately results in the emancipation of the self. 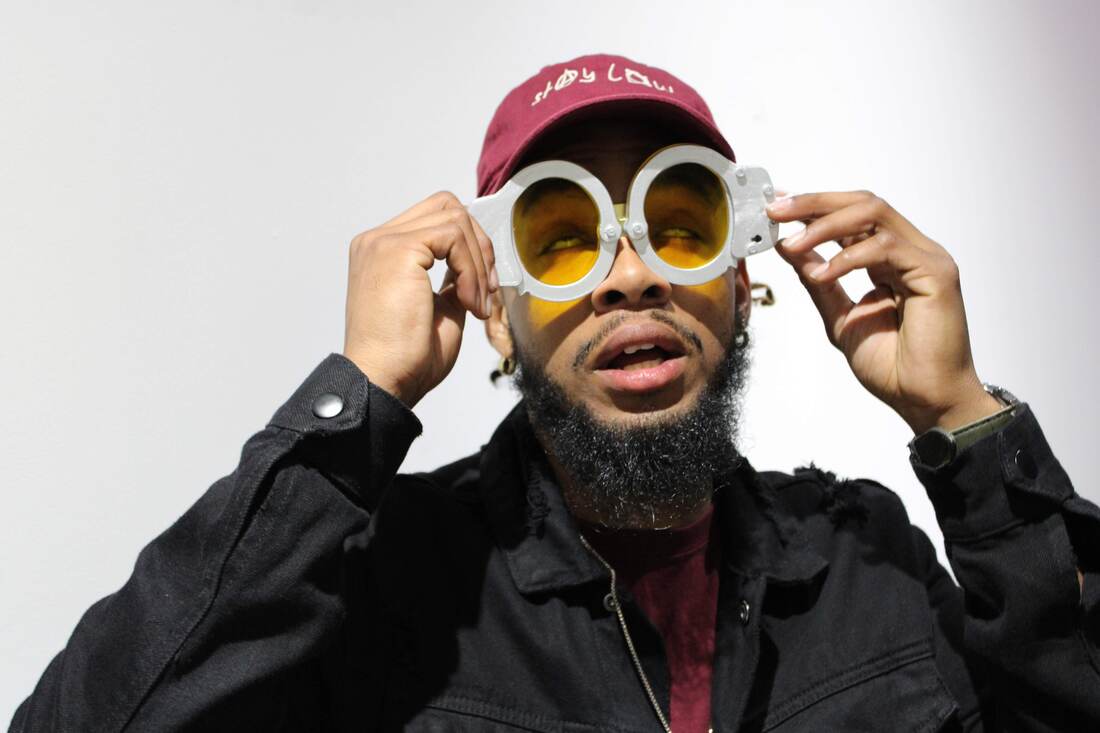 
Institutional Racism is discrimination directed through the practices and regulations of social and political systems based on bigotry. Can You Read the Bottom Row? and Opp TICAL address both prison and health care institutionalization by being as ornamental as the institutions that fail to aid or reform.

Blacks and Hispanics are over-represented by American prisons. As of 2016, although the adult population of the U.S. was 16% Hispanic and 12% Black, the overall prison populace was 23% Hispanic and 33% Black (Pew Research Center). These rates can be attributed to longer sentencing for misdemeanors (i.e. drug possession) and the increased targeting of minorities using arrest quotas, like “stop and frisk,” fueled by racial profiling. Black adults are 5.9 times as likely to be incarcerated than Whites; Hispanics are 3.1 times as likely (The Sentencing Project). Not only are both groups excessively arrested, but they are disproportionately victims to crime as well.

The quality of overall health care (medical, dental, and vision) for Blacks and Hispanics tend to be of a lesser grade when compared to Whites. This can be seen in the statistics of three common health conditions in America: Diabetes, Breast Cancer, and Heart Disease. In comparison to white Americans, the rate of hospitalization due to diabetes is double for Hispanics and triple for Blacks; screening rates and less intensive surgeries for breast cancer are higher for white women than Hispanic and Black women; and Blacks and Hispanics have higher rates of high blood pressure, heart failure, and strokes (Forbes). 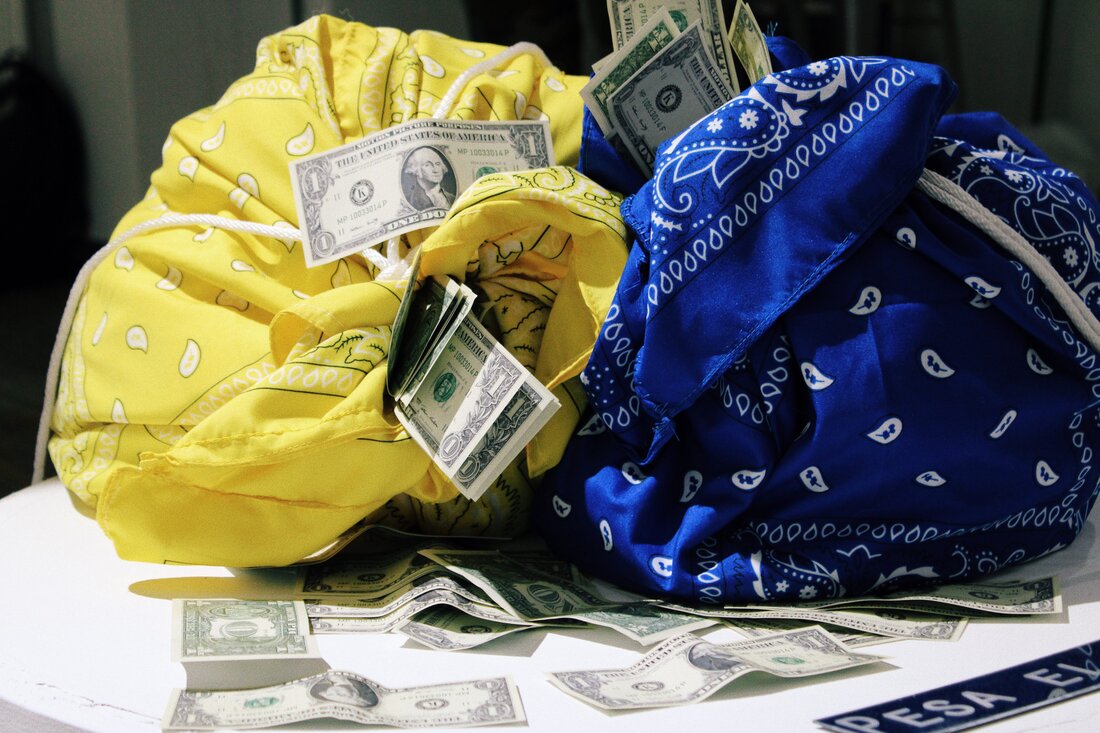 
Pesa el Pesocomes in two colors: yellow and blue. The yellow bandanna represents the Latin Kings; the largest and oldest Hispanic/Latino gang in the United States, with over 30,000 known members (United States Department of Justice). They originated in Chicago under the premise to overcome racial prejudice towards immigrants and gave equal representation to their male and female members. The blue bandanna represents the Crips; a historically Black gang with roughly 35,000 known members (USDOJ). Deriving from Los Angeles, the gang was a result of segregation, exclusion, and the fading of Black movement organizations.

Gang culture and its persistence stem from the need of a government that worked for minorities. For Hispanic and Black communities where the government does not aid, gangs bring in a system where affiliated individuals are recognized, protected, and, most importantly, can gain a source of income. The seemingly quick revenue becomes a hasty fix for two communities with the highest rate of unemployment in America (United States Department of Labor).

The money bag has become a cartoonish symbol of riches, whether that be depicted through a “fat cat” or robbery. Pesa el Peso transforms an object associated with greed, survival, and stick ups into a purse that can be used to hold earnings and everyday items of necessity and leisure. 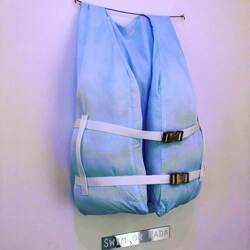 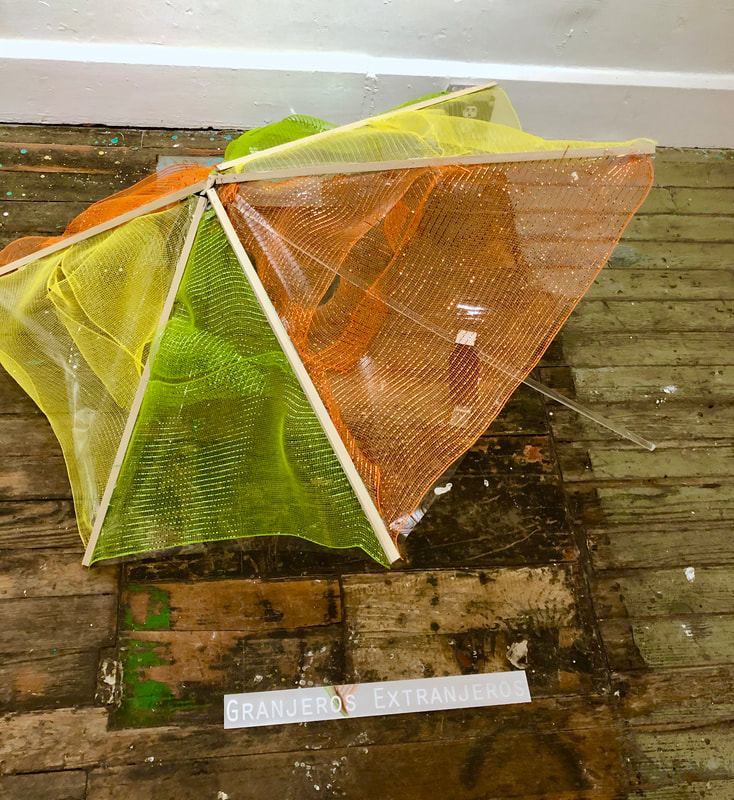 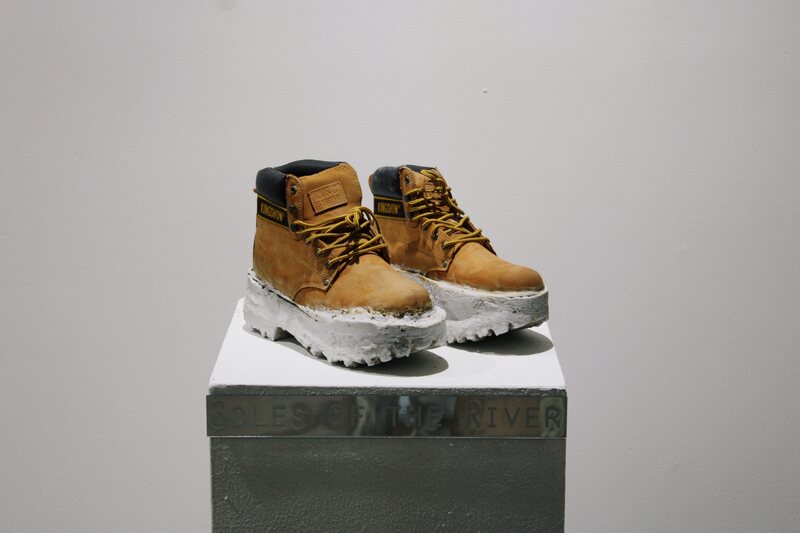 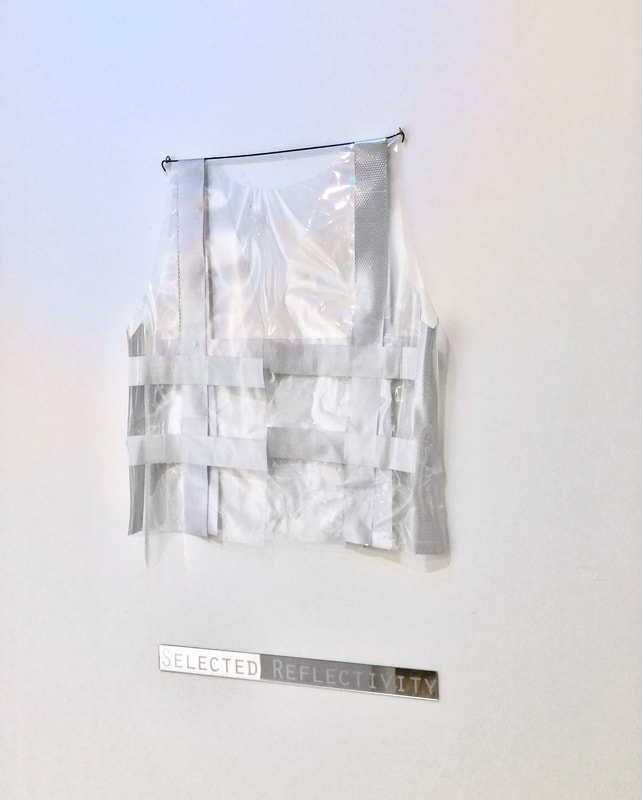 
The American Dream is the ideal that all people in America have the equal opportunity to become successful regardless of their upbringing or identity. The belief in this dream not only has created a patriotic pride amongst United States citizens, but an international hope of forming a new life resulting in foreign immigration to the U.S. However, this hope appears to be white only. Those from American minority communities or non-whites who come risking their life to pursue asylum are met with harmful backlash, making the American Dream appear nothing more than a dream.

Swim or Nada, Granjeros Extranjeros, Soles of the River, and Selected Reflectivityall have a mutual aspect: water. Water has become a repetitive physical barrier for Mexicans and Blacks emblematic of bodily toll, material struggle, and institutional oppression. Masses of Africans were made to cross the Atlantic Ocean into servitude, many died on the voyage; others refused to complete it, like the Igbo people who drowned themselves at Dunbar Creek in Georgia instead of submitting to bondage. Mexicans trekking into America often have to cross the unpredictable Rio Grande River which drowns countless asylum seekers and even led to a federal repatriation project that created a slur against the Mexican people.

Survival in America for minorities is dependent on visibility. When to stand up, stand out, sit down, or sit out can be a matter of life or death. As statedinInvisible Manby Ralph Waldo Ellison “I am invisible, understand, simply because people refuse to see me.” Identity and culture for Blacks and Hispanics tend to alternate between invisibility and visibility to assimilate in society or to make those around them comfortable. Though identity becomes secondary when America views these communities simply as laborers.

Current immigration to the United States is mainly an escape from financial hardship. Immigrants come to work, to provide for themselves and any who rely on them. Mexicans and Blacks have been used by America to grow the country’s economy, but leaves the two communities in economic struggle. Frequently immigrants, Mexicans, and Blacks, are left to do hard labor blue collar jobs to ease white life, yet are left to drown.